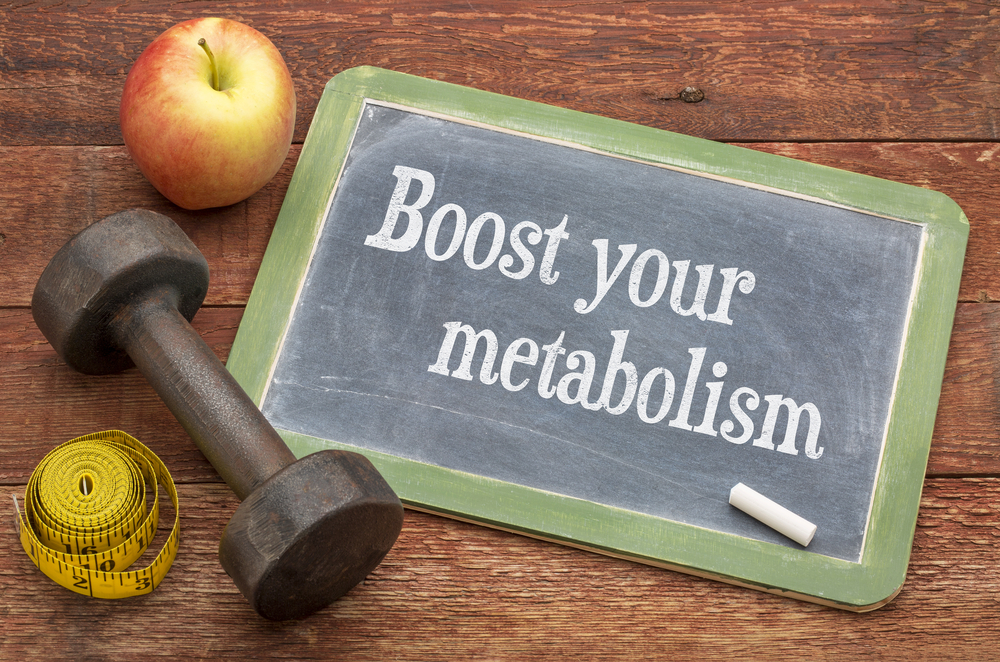 Since technology has simplified so many of our laborious tasks, people have grown accustomed to a more sedentary lifestyle than any previous generation. Fewer people have home gardens, do home or auto repair, or opt to walk rather than drive – even for short distances. As a result of all this physical slowdown, the typical metabolism is doing the same. To best address the issues this can lead to, it is important to find a healthy way to boost metabolism.

Metabolism is the process of the body converting the calories in our food and beverages into energy. This energy is used to fuel all of the functions of the body, even behind-the-scenes activities including circulating the blood, hormone regulation, and cell growth and repair. The amount of calories that our body consumes to carry out these functions is our “metabolic rate.”

Our metabolic rate is affected by many things, but the major factors include:

Larger amounts of muscle burn more calories, meaning a more muscular body will have a higher metabolic rate than a body with less muscle.

This is not universally true at the individual level, but in general, men tend to have more muscle than women of the same height, age, and weight. Due to this, men usually have a higher metabolic rate.

As we age, our muscle mass often decreases, which slows down the metabolic rate. Additionally, age itself decreases metabolism after adulthood.

Our metabolism is related to the overall health of our bodies. Fat forms in the body when more calories are consumed than are burned. Barring any major medical conditions, this usually requires that foods higher in calories be consumed in larger quantities and/or being sedentary more often than active.

Binge eating junk food and not exercising almost guarantees that more calories are taken in than burned. This will only lead to a less healthy body than one that eats satisfying portions of healthy food while routinely exercising. When age slows down the metabolism, working out won’t be enough to burn the calories consumed. You can’t outwork a bad diet.

What Is a Healthy Way to Boost Metabolism?

Good news: there are several healthy ways to boost metabolism! Though the age thing is pretty well set, being in better health will lead to a higher metabolism than if you are the same age in worse health. What are some of these realistic, but healthy, ways to get the metabolic rate up?

Let’s get this one out of the way. Though a base metabolic rate may be pretty set due to the current health and age, extra activity always burns more calories than less. The biggest-result implementations include combinations of aerobics and weight training.

Eating can actually boost metabolism. The process of digesting and absorbing the nutrients actually burns calories. Protein increases the metabolic rate by 15-30% as opposed to just 0-3% for fats or 5-10% for carbs. Protein also helps you feel fuller at fewer calories, reducing intake.

Though it sounds too simple to make much of a difference, a few hours of standing instead of sitting can burn an extra 150 calories. Inactivity also decreases the metabolic rate, whereas the use of leg muscles from standing leads the body to believe it is more active than it is and keep the rate from dropping further.

Oolong and green teas have garnered quite the reputation for helping with weight loss. This is due to the low number of calories for a flavored beverage as well as acting as a natural stimulant to keep the metabolism in a more active state. Coffee does as well, so long as it isn’t loaded with cream and sugar.

Spice is a plant’s defense mechanism to keep from being eaten. This defense turns out to pair well with food. The capsaicin that creates the burning sensation in peppers can boost metabolism. It also usually reduces the amount of consumption of the food. This gives the double effect of fewer calories consumed and more calories burned.

Unlike many oils used in cooking, coconut oil is a medium-chain fat. What this means is that it can increase the metabolic rate more than long-chain fats such as butter.

As people are growing more health-conscious, we’ve developed more efficient means of taking in certain vitamins and nutrients than just eating the right combination of foods. Vitamin B, for example, is often being delivered by injection as a quick pick-me-up.

Building off of the oxygen intake and vitamin shots, IV packages have been gaining popularity for more than just general hydration. Certain mixes of antioxidants and select proteins with vitamins can produce IVs to help improve athleticism. SLIM: me is an IV combining amino acids with B vitamins to boost metabolism and curb appetite.

Get Started on the Right Package for You

If you are looking to rejuvenate your metabolism, but do not necessarily have the time to plan out daily healthy meals and hit the gym, reach out to us at IV Wellness of Winter Park, FL to determine how IV therapy can help you!